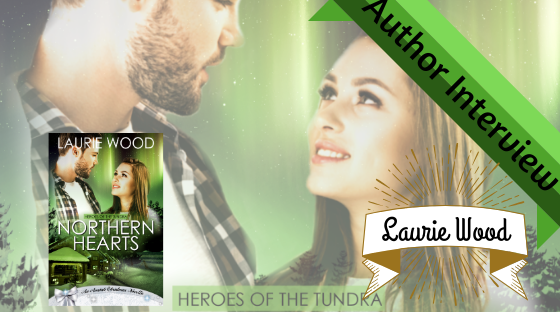 Wealthy socialite Kali McIntyre dreams of opening her own dessert bar, Sassy Sweets, in downtown Winnipeg—until her father crushes that dream when he cuts her off financially. He’s determined to get her to use her law degree to join the family’s high-powered law firm. She’s determined to do anything but that. And when an unknown-to-her aunt dies in Churchill, Manitoba, leaving her an unbelievable inheritance, Kali’s on the next flight up north to make her dreams a reality.

Chef Jake Miller has lived in Churchill for the past ten years, working hard to keep The Great Northern Lodge afloat through some tough times. But then his business partner dies unexpectedly, without telling him that she’d changed her will or that she had a niece who is set to inherit everything. Now, Jake and Kali have thirty days to work together and decide–who will stay and who will go–before Christmas rolls around. Secrets, attempted murder, and a new menu all add up to a Christmas unlike any other.

In the mid-1980’s I was a municipal police officer when women in Canada were pioneers in policing. But I always wanted to be a writer. Now I’m a military wife who’s lived across our beautiful country. My husband and I have raised two wonderful children with Down Syndrome to adulthood and they bless us every day. My books have finaled in the prestigious Daphne du Maurier (twice), the TARA, the Jasmine, and the Genesis contests. We live in central Canada with a menagerie of dogs, cats and kids and if the house were bigger, no doubt we’d have more.

What is the inspiration behind your writing?

For my current series, “Heroes of the Tundra”, my husband’s trip up to Churchill, Manitoba inspired me in 2011 when he did a Search and Rescue exercise for a week. He’s in the Royal Canadian Air Force and it was a practice exercise for every SAR technique in the cold wilderness at the base of our arctic. He took hundreds of photos of the town and the waters of Hudson Bay, which empties into the Arctic Ocean and the Atlantic Ocean. Also, he took photos of the tundra and all the areas they fly over. The people who live there intrigued me. They make a living out of tourism in the north. Polar bears in winter and beluga whales in the summer, with the Northern lights thrown in after the polar bears have gone out onto the sea ice in mid-winter. They filled my brain with all kinds of story ideas!

Do you have a favorite author or book?

My all-time favourite author is Daphne du Maurier. She was the first woman to write “romantic suspense,’ way back in the 1950s and ‘60’s. I love her historical novels, such as “Jamaica Inn” and “My Cousin Rachel”. Several of her books have been made into movies. Many people don’t know she wrote “The Birds” as a short story. Alfred Hitchcock made it into a horror movie, which was nothing like the story other than a plague of birds overtaking a small town. She’s not a Christian author, but she’s a “clean” author so if you’re interested in reading someone from the classical time of romantic suspense; books like “Rebecca” and “The House on The Strand”, you should try her.

If you could sit down to dinner with three authors, who would they be and what would you discuss?

Well, Daphne du Maurier would be the first one! And C. S. Lewis, and then  Jaime Jo Wright, to have someone live from today’s era. Daphne because I’d want to ask her about where she got all her ideas for her books. C. S. Lewis because I’d love to ask him about his conversion and who he really wrote the Narnia books for, and Jamie Jo Wright because I love her books and think she’d be cool to hang out with–she’s sold gothic horror in a Christian market and that takes a lot of talent!

What do you like to do when you’re not writing?

I’m a long-time crafter. I have two spinning wheels which both are in use for different wool spinning at the moment. One is an antique Icelandic wheel from the mid-1800’s, and the other one is a modern wheel about 35 years old. I knit and my passion is making socks, which sounds weird, but they’re portable and I can knit on them anywhere. I spin my own yarn and I also buy up sock yarn wherever I find something I love. Knitting is SO relaxing and so is spinning. They’re my reward for writing.

As a writer, what would you choose as your mascot/avatar/spirit animal?

My “spirit animal” would be the wolf. I’ve always loved wolves and the fact they’re pack animals. They’re also led by alpha females, which would be me, lol, and they mate for life. I have a beautiful wildlife painting of three wolves on the crest of a hill. It was my first major purchase for my “own” place when I left home.

How do you select the names of your characters?

A couple different ways. Sometimes it’s because I’ve already found a name I love. For my heroines in this series, and the next series I’m planning, I’m using the names of my nieces. My sisters and sisters-in-laws have all named their girls with unusual and beautiful names. So, each girl is getting her own book!

I’ve also asked for suggestions in my Facebook readers group, which has given me my wonderful character of “Emberlyn Marie Gallagher” for NORTHERN PROTECTOR, Book 2 in Heroes of the Tundra. And in last month’s newsletter, I asked subscribers to send me their name or the name of someone they wanted to nominate for either the murder victim or the murderer in the book. I had a fantastic response! Such a great response I expanded my story and have two murder victims now.

I make most of my characters up names, but it’s fun to use people’s names with permission, like my nieces, who are all old enough to read my books. And it’s fun to have my readers take part in naming characters.

What is the most difficult part of your artistic process?

For me, it’s the dreaded “first draft”. This is because I’m a perfectionist and what I “see” in my mind doesn’t come out in the first draft. I hate writing a messy, note-filled draft, but that’s the reality of a first draft. It feels like I’m jack hammering words out of a rock sometimes.

However, once I’ve got those words down, I can go back and hone them into what I’m “seeing” in my mind’s eye. I’m a visual person so I make actual “vision boards”–not just on Pinterest–of clippings of people that remind me of my characters, their houses, buildings, maps of the area, etc. This all helps to keep me “in” the story. Walmart loves me! Those triptychs white boards are wonderful to use–they fold up and you can put them away when you’re done writing.

Thank you for hosting me today! It’s been fun!

Laurie, thank you for spending time with us and for the wonderful answers to my questions. I can’t wait to read Northern Hearts!

I live in the same small town where I've always been. Someday I hope to travel, but I will always call this place home. I'm a simple person, with a simple life and an imagination that refuses to hush until I write out the life of the characters in my head. I hope you enjoy my books and my blog. I hope I can inspire you to do what you love. Follow your dreams. God bless. View all posts by tabithabouldinauthor

1 thought on “New Release and Author Interview with Laurie Wood!”

A fantasy book full of action, wit, and fight scenes, with an undercurrent of romance and no shortage of betrayal and intrigue. Seekers starts off with a bang that carried intensity throughout the novel and gives your characters that bandy words as well as swords.
I knew by the 2nd page that I wouldn't be able to put it down. #themazerunner #themazecutter #jamesdashner #bookreader #bookseries #booksarebest
Ready for spooky fall reads? #fallreads #spookyreads #fantasybooks #fantasyworld #fantasyreads #fantasy #yafantasybooks #yabooks #Readingcommunity #readagoodbook #readmorefantasy #readmorebooks #readfantasy #bookreader #fantasyrecommendations #fallreading #gallant #veschwabbooks #veschwab #lakesedge #mortalsight #madnessinwonderlandbook #fairytales #fairytalebook #fairytaleretellings #fairytalereading #booksarebest #booksuggestions
Reposted from @InspyRomance It’s a Reader Thing - Tabitha Bouldin
To believe or not to believe? That is the question Alice must answer.
🌲 It’s fall but I can’t wait for Christmas. Who’s with me?