Today on Thoughtful Thursday, we have Donna Gartshore here to give a little sneak peek into her new release Instant Father. The Love Inspired line at Harlequin always catches my eye with their unique covers and intriguing stories. 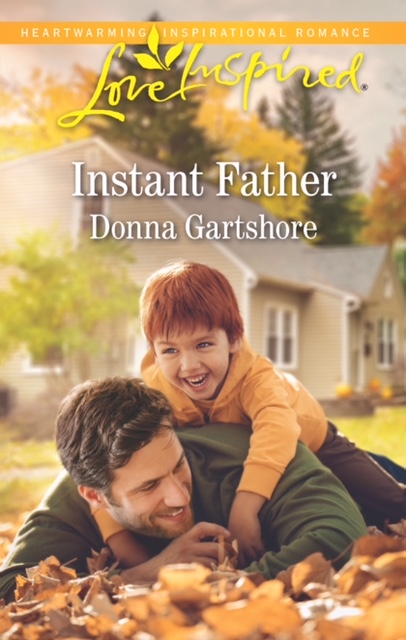 The heroine, Charlotte, struggles with meeting her own goals and finding God’s purpose
in her life while her feelings for the hero, Paul, continue to grow.

“Trying to get rid of me?”
She was startled at first but then saw the twinkle in his eye. It appeared that Paul too was
ready to be done with their teacher-parent roles, but she couldn’t resist adding one more thing.
“I hope I’ve made it clear, Paul, I won’t tolerate being pressured about this. But, at the
same time, I want you to trust me. Can you do that? I care about Tyson too, just as I care about
all of my students.”
“I trust you,” Paul said, but she couldn’t escape a peculiar sensation that those words
were unfamiliar in his mouth.
“I, uh, missed you at lunch yesterday,” he added, his tone gruff with confession.
So, he had noticed. I missed you too …
But she couldn’t bring herself to say the words or to stir the embers by admitting that she
had stayed away to avoid the very confrontation they’d just had.

“I had a couple of things I needed to take care of,” she said. That was true on any given
day in the life of a busy school teacher and she didn’t volunteer that she’d spent her lunchbreak
searching missionary sites and commanding herself not to have second thoughts … just as she
had willed herself not to give in and walk over to Harold’s so that she could see Paul’s face light
up when she came in the door.
“Well … you were missed.” Paul said it in a shy way that warmed her heart.
It was clear that he didn’t want there to be tension between them any more than she did.
She suddenly wondered how it would go over if she was to start dating the guardian of
one of her students.
Whoa, now where had that thought come from?
Despite the kiss they’d shared, Paul had never given her any indication that he had the
time or inclination for a relationship. She still knew that his primary focus was Tyson and the
role she played in the boy’s life as his teacher. He had proven that again today and she had been
reminded of what her responsibilities were, not only to both of them, but to her profession in
general.
Besides, there was her application, making its way through the mail and waiting to bring
back with it the answer to her future.
An answer that she was no longer sure she was ready for.

Donna has been creating stories for as long as she can remember. She was about six years old when she wrote her first story. Her father, who was a journalist, read the story and told her what was good about it but also what could be improved.  She is thankful that he took the efforts of a little girl so seriously and always helped her to believe that she could write.

Donna loves writing for Love Inspired to share her faith and belief in happy endings. She also writes poetry, short stories and devotions.

I live in the same small town where I've always been. Someday I hope to travel, but I will always call this place home. I'm a simple person, with a simple life and an imagination that refuses to hush until I write out the life of the characters in my head. I hope you enjoy my books and my blog. I hope I can inspire you to do what you love. Follow your dreams. God bless. View all posts by tabithabouldinauthor

Leave a Reply to the #1 Itinerary Cancel reply

Who would you want by your side in a battle? I'm taking Hatter, of course.
Reposted from @jenniferdeibel_author IT’s BACK!!!
#bookcoversilove #bookbuyingproblem #bookishthoughts #bookcovers #bookcoverdesign #smallfavors #darkandshallowlies #houseofhollow #readinglife #readmorefantasy #readmorebooks #readbooks #read #fantasybooklover #fantasybooklovers #fantasytoread #fantasybooks #fantasy
Hatter takes time for the things that really matter to him. Alice, being his top priority.
Christmas has come early this year!
Are you ready for a new Wonderland?